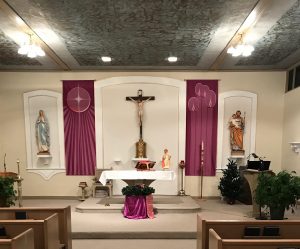 Allen Andrew Hess came to Jonesburg in 1858 and built the first Catholic church in 1866 when there were 12 members. He was a Methodist until the age of 18 and then joined the Catholic Church. The name of one of his sons was Patrick.

In 1866, preceding the Sacred Heart Church, a boys’ school known as the “Academy” was in operation here. A Fr. William Lewis was principal. Sparkhill Dominican Sisters were on staff from 1900-1901. Boys from New York and other eastern states attended along with local students.

The Catholic parish in Jonesburg was organized in 1868 and originally was called the Church of the Sacred Heart. No information seems available as to when the name was changed to St. Patrick’s. The first congregation numbered 30; the church building, a frame structure, cost $1,200. For several years, the parish was served once a month from Montgomery City by priests who traveled on horseback.

The first resident priest came in 1894. Fr. Francis Dieckmann was pastor during World War II when the first rectory was built. He was also the guiding spirit in the construction of an annex to the old church to serve as a parish school which was in operation for several years.

Our Lady of the Rosary Parish at Truesdale was established as a mission of St. Patrick Church. It was built and dedicated Sept. 12, 1920 and was served by Fr. Dieckmann.

The present church and hall in Jonesburg were erected while Fr. Arthur Leibinger was pastor in 1955.The present rectory was built in 1966 by Fr. Lyle Kennedy.

In 1994, one year after she had been a pastoral minister in the parish, a laywoman, Kristin Roth, was appointed by the Bishop of Jefferson City to be the Pastoral Administrator of the parish. A priest who lives outside the community commutes to provide the ministry of the sacraments in Jonesburg.

In 1998 and 2005 the houses belonging to George & Alvina Weyerich and Barbara Weyerich that adjoined the parish property were purchased. The parish now owns the property on First street from Interstate 70 to Moriarity Street.